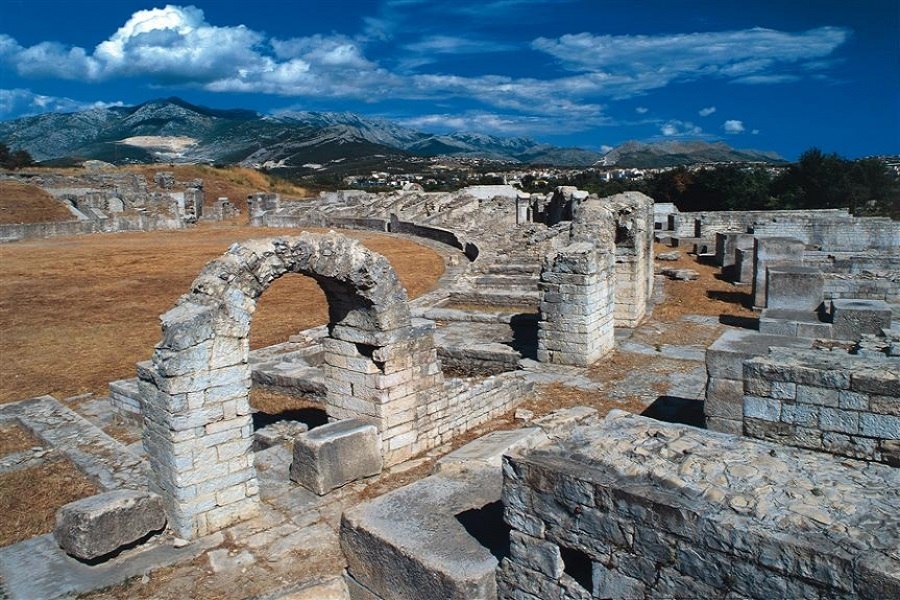 SEGET VRANJICA is a tourist spot located on a small peninsula in Central Dalmatia. The village is conveniently situated only 5 km from Trogir, 8km from the Split Airport and 30 km from the city center of Split. Mediterranean climate and vegetation, natural attractions, numerous amazing beaches and coves with a view of the islands, to name but a few reasons why so many visitors looking for a relaxed holiday come to Seget Vranjica.

SEGET DONJI is a picturesque fishing village established in 1564 near Trogir. Its rich history has been increasingly attracting tourists. A small patrician family Rotondo built a small fisherman`s settlement in order to defend from the Turks. It has a squarely ground – plan sorrounded by defensive walls and towers. Some towers and defensive walls have been preserved up to today. In the centre of the Village there is the baroque church « Gospa od Ružarije « with its worthly painted crucifix from 14th century.

SOLIN is a town in Dalmatia renowned for its rich cultural and historical heritage, which was founded on the remains of the ancient town Salona, former capital of a Roman province. Ancient walls with towers, amphitheatre, Hollow Church where the coronation of Zvonimir was held in the 11th century and numerous other monuments serve as a reminder of its glorious history. Solin truly is one of the most important places in Croatian history and a definite must-see for any visitor.

OMIŠ is a town situated at the mouth of the Cetina river, uniquely located between a mountain, river and sea. The settlement was founded at the foot of a fortified hill called Starigrad. Due to constant threats comming from both land and sea, Omiš was fortified already in the Middle Ages. The most significant historical monument in Omiš is Saint Peter’s Church dating from the 10th century. Other attractions include a Renaissance Church of the Holy Spirit from the 16th century with a wooden altar featuring the painting Descent of the Holy Spirit by Palma the Younger, and the Town Museum with archeological and ethnographic artefacts.

PRIMOŠTEN is one of the most attractive places on the Adriatic coast situated on a small island which is connected to the mainland. Primošten’s  interesting architecture and nature attract a great number of tourists of all age groups. Besides historical sites and clear blue water the town offers a variety of restaurants and entertainment activities.

CITY OF ŠIBENIK AND NP KRKA are another places of interest close by. Šibenik is situated in a charming bay where the river Krka flows into the Adriatic sea, so both places can be visited in a single day. Šibenik’s attractions include cultural monuments, the most important being the Cathedral of Saint James dating from the 15th century. Krka National Park is a natural phenomenon that definitely should not be missed. It has seven travertine cascades surrounded by pure nature and breathtaking scenery. Apart from walking around the park and admiring this remarkable natural phenomenon, the visitors can also use the opportunity to have a swim in the Krka river.

PLITVICE LAKES NATIONAL PARK is one of the most beautiful natural phenomenon in the world which consists of 16 lakes and over 90 waterfalls. The national park was established in 1949 and 30 years later it was added to the UNESCO list of World Heritage Sites. Remarkable scenery with its great diversity of flora and fauna will enrapture anybody. The best way to experience this amazing natural phenomenon is to go on foot and enjoy boat rides across the lakes.